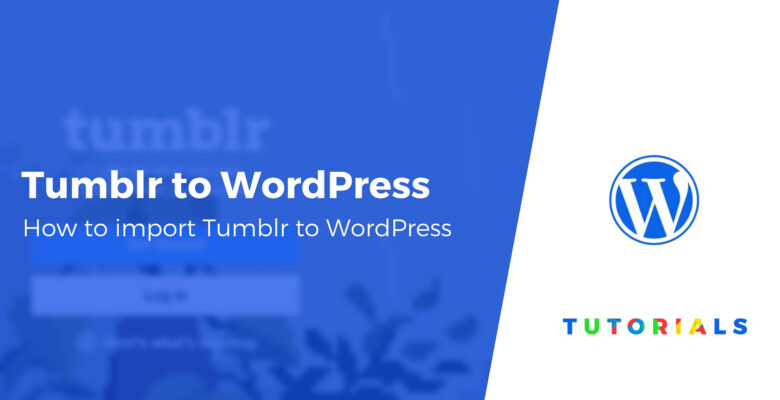 Looking to import Tumblr to WordPress? Thanks to a built-in tool in WordPress, it’s surprisingly easy to migrate your content from Tumblr to your own self-hosted WordPress site. In fact, once you get a little housekeeping out of the way, most of the process is entirely automated.

In this article, we’ll start off discussing the implications of migrating from Tumblr to WordPress.

Then, we’ll show you how to import Tumblr to WordPress in five easy steps.

Tumblr websites are relatively simple when it comes to their structure. At their core, you have posts, which can contain both text and media elements:

Since Tumblr is mostly ‘micro-posts’, importing its content to WordPress is simple in most cases.

Your posts should look mostly the same within WordPress, with two caveats — WordPress can’t import ‘re-blogs’ or likes, as they’re native to Tumblr.

You also won’t be able to bring along your exact Tumblr design. But there are thousands of free and paid WordPress themes, so you can probably find something about the same (or maybe even better).

How to migrate from Tumblr to WordPress (in 5 steps)

Before you can import Tumblr to WordPress, you need to purchase web hosting and install the WordPress software.

If you’re not sure how to do that, you can check out our guide on how to make a website with WordPress. Complete steps 1-3 and then come back here to import your Tumblr content to WordPress.

Or, if you already have a fresh WordPress install ready to go, you can jump right into importing your content. Here’s how:

WordPress includes a built-in tool to import Tumblr to WordPress. However, in order for this tool to access your Tumblr account, you’ll need to give it permission first.

To do this, you have to create a Tumblr ‘application’ that enables you to connect both platforms:

You’ll then have to fill out a form. Here’s what to enter in each required field:

Once you’re done, scroll to the bottom of the screen and confirm the registration. Your application details will show up on the next screen:

You’ll notice there’s some information about your app under its name. You’re going to need the OAuth Consumer Key in a minute, as well as your secret key. You can reveal the latter by clicking on the Show secret key option.

Of course, we’re not showing you either of ours because, well, they’re secret! However, keep this tab open for now, open a new one, and head to your WordPress dashboard.

As we’ve mentioned, you’re going to use a built-in importer tool to do the heavy lifting of moving all your Tumblr content to WordPress. To access this, go to the Tools > Import tab within WordPress. Here, you’ll find an option that says Tumblr – select the Install Now option below:

It should only take a few seconds for the importer to install. When it’s ready, the Install Now button will be replaced with an option reading Run Importer. After clicking this, the importer will walk you through the process of creating a Tumblr app. Of course, you’ve done this already, so skip right on down to where it asks you for your OAuth Consumer Key and Secret Key:

You’ll then need to go back to the open tab from earlier and copy both keys over to WordPress. Once you’ve added both keys to their respective fields, click on the Connect to Tumblr button in WordPress.

If everything’s in order, the plugin will ask you to authorize the connection between both platforms – go ahead and do so:

Tumblr will then ask you to confirm the authorization:

When it’s finished, you’re ready to begin the import process in earnest.

After authorizing the connection between both platforms, you’ll see a breakdown of your Tumblr blog and its posts. From this screen, you can select the WordPress author you want to assign your Tumblr content to:

Once you make a decision, hit the Import this blog button and let WordPress work its magic. This part of the process might take a while depending on how much content you’re importing and your WordPress web host.

While the plugin is doing its thing, you’ll see an “In progress” message:

Once it’s over, a success message will appear, which means your content is ready. To take a look at your imported Tumblr posts, head over to the Posts tab and open any of the imported items.

Here’s how your Tumblr posts will look like within the WordPress editor:

You’ll notice there are many more options to customize and format your content.

Also, your WordPress blog may look a lot different from what you were used to on Tumblr. However, this can be fixed.

Step #4: Try to match (or surpass) your Tumblr design

Right out of the box, WordPress uses themes with very clean, modern designs. They don’t look bad, but they’re not as fun (or familiar) as your Tumblr blog’s style might have been. The easiest way to fix this is by installing new themes – WordPress lets you use either free or premium options.

Once you find a theme that you like, you can install the new theme and customize it using the WordPress Customizer.

If you want to take it a step further, page builder plugins such as Elementor let you become a designer and offer full control over your site’s layout and look. This aspect of WordPress can be overwhelming at first. However, we’ve written some quick guides to help you use Elementor:

There’s one more detail to take care of before you’re done – if you were using a custom domain with your Tumblr blog, you’ll want to redirect it towards WordPress. To do this, you’ll need to access your domain registrar and update your nameservers to point from Tumblr to WordPress. If you’re not sure how to do this, you can ask your web host’s support for help.

However, if you used a Tumblr subdomain (like username.tumblr.com), the process becomes a bit trickier as you can’t redirect a Tumblr subdomain in this way. A workaround might be to create one last Tumblr blog post, pointing people towards your new website. However, you could also solve this with code.

Next, look for the Edit HTML option in the sidebar menu:

A bunch of HTML will appear, but don’t be intimidated. Look for the <head> tags and paste the following code between them. Make sure to replace http://yournewwebsite.com with the actual URL of your WordPress site:

Next, scroll down to the <body> tags and paste this code between them:

The last snippet doesn’t need any editing, so you’re safe to save the changes to your HTML. Now, every time someone tries to access one of your Tumblr posts, they’ll be redirected to WordPress instead!

The community built around Tumblr is amazing. However, at some point, you may want to reach a broader audience. This becomes much easier to do if you have access to a broader set of features and functionality than found within Tumblr.

Now that you’re a part of the WordPress ecosystem, you’ll want to learn everything you can do with WordPress. Here are some guides to help you get started:

Do you have any questions about how to import Tumblr to WordPress? Ask away in the comments section below!