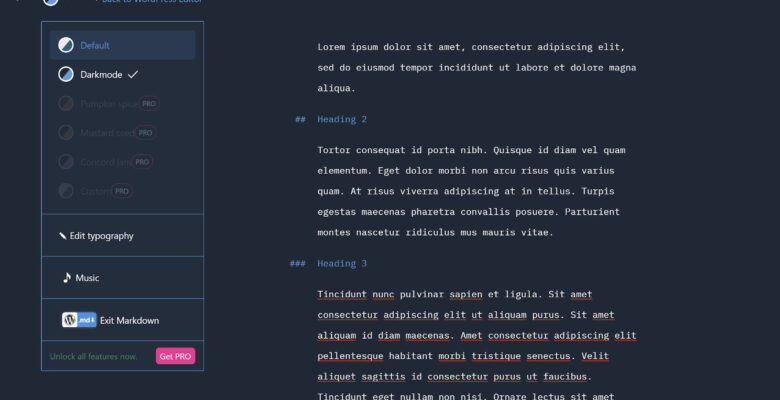 Last year, I asked Tavern readers if WordPress should notify end-users when a plugin’s owner changes. The post was not entirely based on theory. There have been some cases of real-world confusion. The consensus from the comments on that post seemed to be that, yes, such notifications would be welcome.

When I wrote that post, there was already another plugin changing hands. Dark Mode, which had grown in popularity in its earlier years, had a new owner, WPPool. There were no public notifications of this ownership change. A mere GitHub issue filed, a corner of the web that few users venture.

Fast forward a few months, and Dark Mode had not only changed owners, but it also had a new name and set of features unrelated to the plugin’s original promise. The plugin is now named WP Markdown Editor and bundles at least part of the commercially available Iceberg Editor plugin. It is also a limited version in which users are prompted to upgrade for the complete feature set.

Iceberg is licensed under the GPL version 2, so it is legal for anyone to fork it. However, there does not seem to be any mention of the copyright, and only a few references to the original product remain in the source code.

While I did not perform a line-by-line comparison, it is clearly a fork when examining both plugins. However, the company has also built upon it with new features.

“We have recently added productivity sounds, new fonts (more legibility and one for Dyslexic users), which we think definitely adds value to new users,” said the WPPool Team[1].

WPPool announced the WP Markdown Editor plugin in November 2020. However, the post was written as if it was a new product. Technically, it was, but there was no mention of repurposing an existing plugin to launch the features.

The company reached out to the Dark Mode plugin owner in August 2020, which seemed to have changed hands a couple of times, at least. “The plugin was discontinued, lacking security updates, compatibility with latest PHP versions, and the project was abandoned,” said the WP Pool Team.” And, since the last few updates, it was apparent that Classic Editor is not going to stay the same. Gutenberg was the future, and we wanted to give users a Dark Mode for Gutenberg as well.”

WPPool was able to adopt the plugin. The company kept the Dark Mode feature original to the plugin. However, they eventually began tacking on new features.

“Our intention was to add more features on top of it,” said the WPPool Team. “Why not create a new plugin? Because the plugin was already being abandoned, and we thought why not add some more features, keep the old functionality intact as well, and put regular updates?”

The change clearly left some users frustrated and confused about what was happening with the plugin. Many had installed it in hopes of having a simple method of toggling on a dark mode for the WordPress admin interface.

The plugin now has an “Only Dark Mode” setting, an option that users can enable to remove the additional features. It is disabled by default.

When asked about whether the addition of seemingly unrelated features abused user trust, the WPPool Team replied, “The problem was, since the last few updates of Gutenberg and Classic Editor — Classic Editor uses an iframe to load its content. It’s not possible for the Dark Mode plugin to serve the Dark Mode in Classic Editor anymore. That’s why some users were really frustrated. We really tried hard to restore that functionality to Classic Editor as well, but the way it is, we couldn’t find a way to invoke Dark Mode on Classic Editor.”

While some support questions and reviews indicate the frustration with losing Classic Editor support, many others questioned the addition of features that make little sense as part of a dark-mode plugin.

“This used to be a dark mode feature plugin, but now it’s been turned into a Markdown editor,” wrote Derrick Tennant, an earlier contributor to the plugin. “A complete bait and switch.”

Another user named rehoff had similar concerns, stating, “I still believe that it is not ok to so radically repurpose an otherwise popular plugin. I find it misleading.”

Back to the original question I posed last year, another user summed up the answer with a review titled “This plugin has been sold for sure.”

In private, one person has said that it feels like the team is capitalizing on the plugin’s active install base, which currently sits at 3,000+.

Adding to the potential confusion, the company has a separate and unrelated plugin named WP Dark Mode. A reviewer noted on that plugin:

This same developer had another plugin called Dark Mode. They apparently sold the plugin to someone and now it’s a random Markdown plugin with a terrible UI. All of a sudden, this random Markdown editor that I don’t want or need is on my site.

Who knows what this plugin will become when they get enough users and decide to CA$H IN AGAIN??

If you like having random plugins installed on your site, give it a whirl. Otherwise it may be best to look for a different solution.

This case is unique because the Dark Mode plugin was once a feature proposal for core WordPress. Daniel James, the original creator, started the process to make this a reality in 2018. There was support for the idea, but it never jumped the hurdles needed for inclusion or a more formal proposal.

James put the plugin up for adoption in 2019, stating that he was stepping back from plugin development but hoped that someone would pick it up. David Gwyer picked it up shortly after, eventually making two updates to the plugin. The plugin’s commit history shows that Tennant started contributing several months later before WPPool landed on the scene.

While Dark Mode was never officially endorsed by WordPress or given the green light for merging into the core platform, there was still a level of trust that some might expect from a plugin that was at least proposed as a feature.

Perhaps this is one of those cases where an ownership-change notification would have been warranted, but that notice would not have solved the issues that came months later.

The developers did note the new Markdown editor in the plugin’s change log: “New: Write post/ page with markdown syntax (Markdown Editor).” However, it is doubtful the average user read or understood what that meant. Maybe a more thorough disclosure system is necessary, and would such a system cover cases where plugins are repurposed?