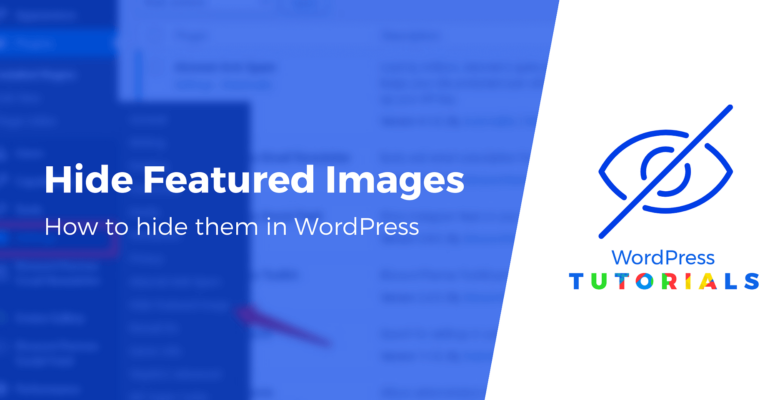 Whether you’d like to achieve a more minimalist look on your website or you want to only remove photos from certain areas of your site, learning how to hide a featured image in WordPress is a useful skill to have in your toolbox.

That way, you have the utmost flexibility when deciding which featured images to hide and which ones to show. 🥷

How to hide featured image in WordPress

The problem is that WordPress automatically activates featured images, so you’re often stuck with an all-or-nothing situation, where you can’t easily hide a featured image on one post, while leaving the rest.

🍀 Luckily, we have several methods for hiding a featured image in WordPress, and they’re accomplished by:

Keep reading to learn about them all.

You can also delete featured images if you previously uploaded them.

👉 As an example, we’ve left the following Featured Image section empty within a post.

That’s possible by either not uploading an image in the first place or by clicking the Remove Featured Image button for a post with one uploaded.

That post also lacks a featured image on the Blog page (where all posts are listed), whereas other posts with featured images still show them.

However, with some themes, the blog listing page can look a bit weird if you don’t upload a featured image, so it’s important to test how it looks on your theme.

Method 2: Use your theme’s settings to hide featured images (if available)

So, you may want to hide them from both spots, or just one of them.

Regardless, it’s wise to check your theme settings before messing with more complicated measures like coding, since many themes already have options to hide featured images in WordPress.

👉 For example, the Neve theme gives you options for hiding the featured image sitewide or only on specific posts. You can also choose between hiding featured images from the blog listing page, the single post page, or both.

Let’s go through the different options…

With Neve installed, go to Appearance > Customize in WordPress, then click on Layout > Blog/Archive.

That deactivates the display of the “Thumbnail,” which is another word for featured image, when talking about the images on your Blog page.

With that, every single post with a featured image hides the photo on the Blog page. As a result, the Blog page comprises only post titles, descriptions, and whatever metadata you include.

The Neve theme also offers the option to hide all featured images on the actual posts.

If you have a Normal header layout, scroll down to the Elements Order section of the Customizer.

Unmark the Eye icon next to the Thumbnail element.

That hides the “Thumbnail,” (another name for a featured image) from view on the post.

If you’re using a Cover header layout, the process is slightly different.

Scroll down in the Layout section of the Customizer to find a setting to Hide Featured Image. Flip that switch, and hit the Publish button.

With the setting activated, you’ll see that the featured image gets hidden from the post.

Not only that, but every single post, across your entire website, hides their featured images as well.

Of course, you can also remove the thumbnail featured images, as discussed before.

Finally, Neve (and many other popular themes) also gives you options to hide the featured image from an individual post’s page, while leaving them activated by default.

Hiding featured images with CSS code is the most technical method, but it gives you the power to target the specific posts where you want to hide the featured image.

However, you might need to know some basic CSS to adapt these snippets to your theme.

To hide the featured image for a certain post using CSS, go to Appearance > Customize, then navigate to Additional CSS.

Paste this bit of code into the Additional CSS field:

Then, simply replace the 123 with the ID number associated with the desired post.

Find that number by opening the post editor. There, you can look to the WordPress editor URL in the browser, which says a number after post=.

After getting the code, and the right post number, into the Additional CSS field, be sure to click the Publish button. WordPress then hides the featured image for that post and no others.

💡 Keep in mind that the Blog page on your website still shows its featured image thumbnails with this method.

In addition, you should be able to visit other posts, besides the one in which you hid the featured image, to see their featured images.

Method 4: Use a plugin that hides featured images conditionally

As a final measure, you might think about conditionally hiding or displaying featured images with a plugin.

In layman’s terms, that’s a fancy way of saying you can hide a featured image on specific pages, and it’s all handled by a plugin.

For this, you’ll use the plugin called “Conditionally display featured image on singular posts and pages.”

Install and activate the plugin, then go to Posts in WordPress. Select a post for which you’d like to hide the featured image.

Under the Post tab (to the right) find the Featured Image section.

With the plugin now installed, you’ll see an option to “Display featured image in post lists only, hide on singular views.”

Mark that checkbox to activate the feature.

Be sure to click the Update or Publish button to make the changes live.

Yet, the true purpose of the plugin is to hide the featured image—without forcing you to delete the image—on only one post or page.

And for that, it works perfectly.

ℹ️ Note: Some themes take over the featured image functionality with “cover” images, so this plugin may not work if you’ve activated covers. For instance, in the Neve theme, the plugin only functions properly if you have the Normal header layout set, but it does nothing with the Cover header layout.

It’s not immediately clear in WordPress how to remove or hide a featured image, but there are some tools to make it work—and for different situations like removing a featured image from one post or all posts.

In this article, we covered the handiest options to hide featured images, including:

Do you still have any questions about how to hide the featured image in WordPress? Ask us in the comments!